You hear some strange noises behind you and turn around to see three excited scientists. They inform you that they've figured out a way to modify The Portal to take you to a new type of challenging dimension, a system they proudly call 'Challenge2'. You will be able to activate and check out their new technology by clicking the 'Challenge2' button next time you go to use The Portal.

Challenge² is a special set of challenges which become permanently unlocked and available for completion after reaching zone 65. These are exact copies of normal challenges, except they don't end at specific zones. Instead, upon completion (through Portal or abandon), each Challenge² grants the player with permanent additional bonuses to attack, health and helium for reaching certain HZE (Highest Zone Ever) milestones. The bonus can only be increased by reaching higher zones in each Challenge²; repeating a single Challenge² to the same zone will not increase it. The total bonus will apply to all your future runs.

15 standard challenges can be unlocked as Challenge²s. These include:

In addition, there are two other challenges with completely different rulesets existing purely as a challenge²:

Despite having the same rules as standard challenges, you can't complete some challenge related feats (see Achievements) in Challenge²s.

Most Challenge²s give the same rewards for reaching the same zone milestones, with some exceptions. All of the Challenge²s and their following bonuses add to a single separate multiplier, and any additions to this multiplier are additive.

The reward formula for every challenge, in general, is: 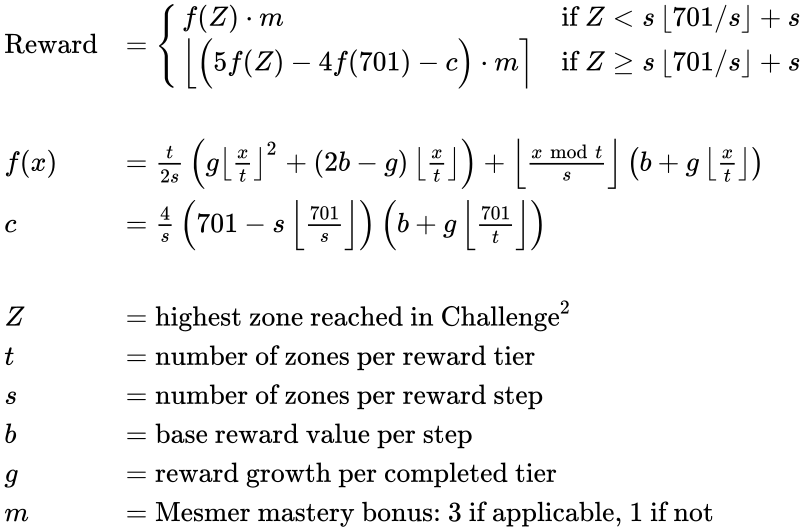 On the tables below, rewards are formatted as so:

Where X is health and attack % and Y is helium %.

Percentages are cumulative, i.e. reach this zone record to have that amount of total bonus from one challenge.

Below is a table of total reward percentage (divide by 10 for Helium) from all 12 default Challenge²s (with the default rewards distribution), therefore it doesn't include Trimp, Trapper, Coordinate, Obliterated or Eradicated.

With the Mesmer Mastery, the bonus from the 12 default challenges is tripled.

Zones above 701 are worth 5x more bonus.

Community content is available under CC-BY-SA unless otherwise noted.
Advertisement